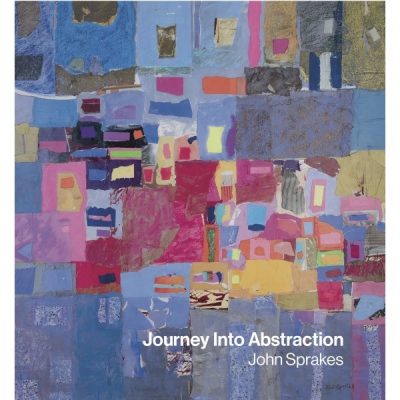 MAFA member John Sprakes has recently launched his book Journey Into Abstraction. In it, he discusses his artistic career spanning over sixty years. The book looks at the development of his work from figurative, derivative, through to abstraction.

Most of his paintings are taken from life. For John, drawing is an important starting point for his ideas and he uses it to explore the visual world. The movement of light and colour across landscape and interiors is also a constant source of inspiration to John. Composition, form and texture all play an important role in the construction of his paintings.

Creating the illusion of three-dimensional space on two-dimensional surfaces produces the kind of visual magic that enables the spectator to experience a new way of seeing.

John has painted in many places throughout his career, whilst staying near Hadrian’s Wall he discovered a disused signal box which acted as a temporary art studio throughout his visit. In his work John has returned many times to the remote landscapes of Norfolk, Suffolk and Northumberland. His paintings capture the wide expanses and the intense light found here, as well as the peaceful isolation of the uninhabited beaches, sea cottages and beach huts dotted along these coastlines.

His still life paintings draw upon memories that are historical, social, and of childhood days distilled together in the final image. John is skilled in using mixed-media and prefers to use acrylics, Liquitex, canvas, board, paper, card, brush, palette knife, drawing media of all kinds, photography and colourful gesso grounds.

I sometimes uses photography for information and investigation. I tend to plan paintings using sketched studies done on the spot, but also work directly from nature. My still life paintings and interiors are painted in my studio.

Journey Into Abstraction comprises of John’s biography and insights into his working methods and thought processes. Readers are treated to a mix of artistic advice and illustrations as well as anecdotes and poetry. John has selected poems from those writers he most admires; Graham Best, Ted Fairclough, Monty Martin, John Micallef, Jerry Prince, Dawn Reed, Moira Trafford and James Usher. There are also a few verses penned by John himself. Some of the poetry and a piece of jazz music entitled Manhattan were written as a reaction to John’s paintings. Readers can listen to the music by scanning a QR code.

As an established artist John has exhibited widely in solo and mixed shows across the UK and his awards include The Le Clerc Fowle Gold Medal (ROI) and Manchester Academy Prize. As well as being a member of MAFA, John was also elected to The Royal Institute of Oil Painters in 1984 and the Royal Soicety of British Artists in 1986. John’s paintings are also held in private and public collections across the UK, Europe and USA.

You can see John’s painting on display at Pocklinton Arts Centre until 4 January 2020. His next solo exhibition will be showing at Beverley Art Gallery from 14 March 2020.