Branching out to do something different, MAFA member, W. John Hewitt has recently completed Outlandish a colloborative work of poetry and drawings with writers Jo Clement and Damian Le Bas.

Last year John joined both writers on St Cuthbert’s Way – a modern walking trail based on an ancient pilgrim’s path – it weaves it’s way through the stunning scenery of Northumberland and County Durham and into South East Scotland. The walk is named after Cuthbert, a 7th-century saint, who spent his life in the service of the church. Pilgrims have travelled this route for hundreds of years making their way from Melrose in the Scottish borders to the Holy Island of Lindisfarne.

For hundreds of years Traveller famili 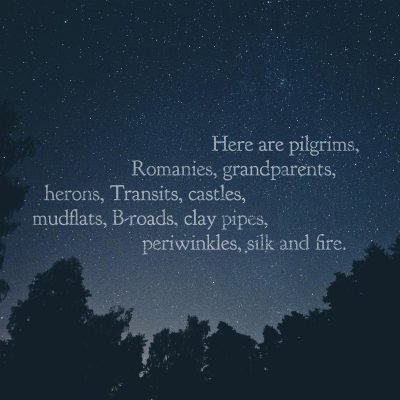 es have also used this route and during this journey, John, Jo and Damian explored the 500 years of ethnic Romany history along the trail. The resulting book documents culturally significant places as well as helps to make visable a Traveller history that is currently invisable.

How did you meet writers Jo Clement and Damian Le Bas?

I had been following Damian on instagram after reading his book Stopping Places about Traveller resting places. Damian had also seen my sketches on social media. In June 2013, I started making daily drawings inspired by my dog-walking encounters, and posting them on Instagram. Damian messaged me about the project and I first met them both in person when we arrived at Melrose – we got on straight away. Jo had completed a PhD that involved the work of the wood engraver Thomas Bewick whose work I admire very much.

Did you complete the whole 62 miles of St Cuthbert’s Way?

Damian said that the walk would take us 5 days in all, but because I had to stop to undertake the drawings I wasn’t able to complete the whole walk. Instead I would meet them at a starting point, walk some of the way and then begin a sketch, then I would take this preliminary drawing back to my room and work it up. Sometimes if they had seen something of interest during the afternoon I would return to that place and sketch it the following day. The whole process was very organic and unrestrictive.

What was your favourite part of the walk?

It had to be the causeway crossing at Lindsfarne. The scenery was so minimalist and throughout the walk across the sands Damian and Jo recited poetry.

What is your favourite drawing? 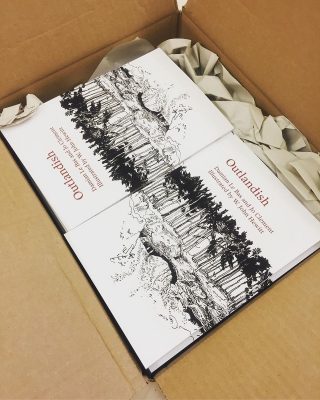 I have two, the first is featured on the front cover of Outlandish. It shows St Cuthbert’s Cave which is located about 20 miles from the end of the route. The cave is situated in woodland and I got there ahead of the others, so was alone for about half an hour. The place was very atmospheric, St Cuthbert had lived there as a hermit. Unfortunately for him thousands of pilgrims kept on turning up so I don’t think it would have been that peaceful. 300 years of graffetti also cover the inside of the cave from modern felt-tip pen to ancient carvings.

The second drawing is a quick sketch of a dog which I penned. We were at the Eildons linked to Thomas the Rhymer or ‘True Thomas’ who was a legendary character said to be the author of many verses. The character is thought to be based on a real person -Thomas Rimor de Ercildoun, a Scottish laird and poet, born around 1220. At the Eildons Thomas claimed he had fallen asleep and been taken to fairyland, he awoke 7 years later with the troublesome gift of always telling the truth. Whilst we were visiting we got the news that the Arts Council would fund the book and this little dog came running madly around the hill as though in celebration.

Are there any linked events planned around the project?

Yes, some events have taken place and others will be happening in the next few months. Damian and Jo will be delivering some writing workshops and readings. There are also workshops planned with some of the North East Traveller community.

‘Outlandish’ is now available to purchase through Amazon. 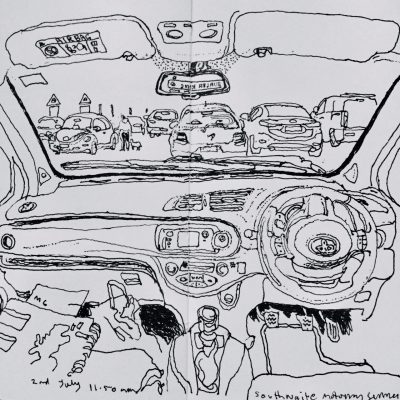 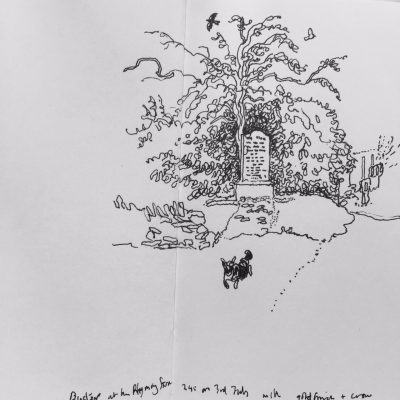 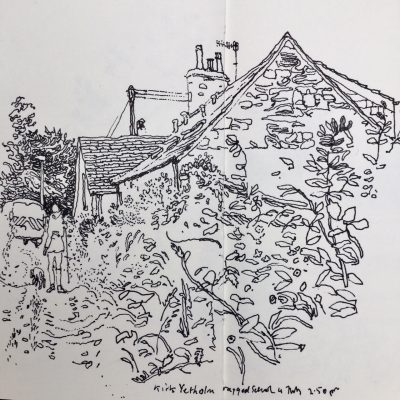